Supplemental Agenda due to COVID-19 END_OF_DOCUMENT_TOKEN_TO_BE_REPLACED

On November 11 of 1918, the 11th hour of the 11th day of the 11th month, an armistice went into effect,a cessation of hostilities between the Allied Nations and Germany, ending the “war to end all wars.”

The official end of World War I would not be declared for seven more months, at the signing of the Treaty of Versailles, but the end actually came on that November day, when the truce was signed, the opposing forces laid down their weapons, and the war known as the “Great War” was over. 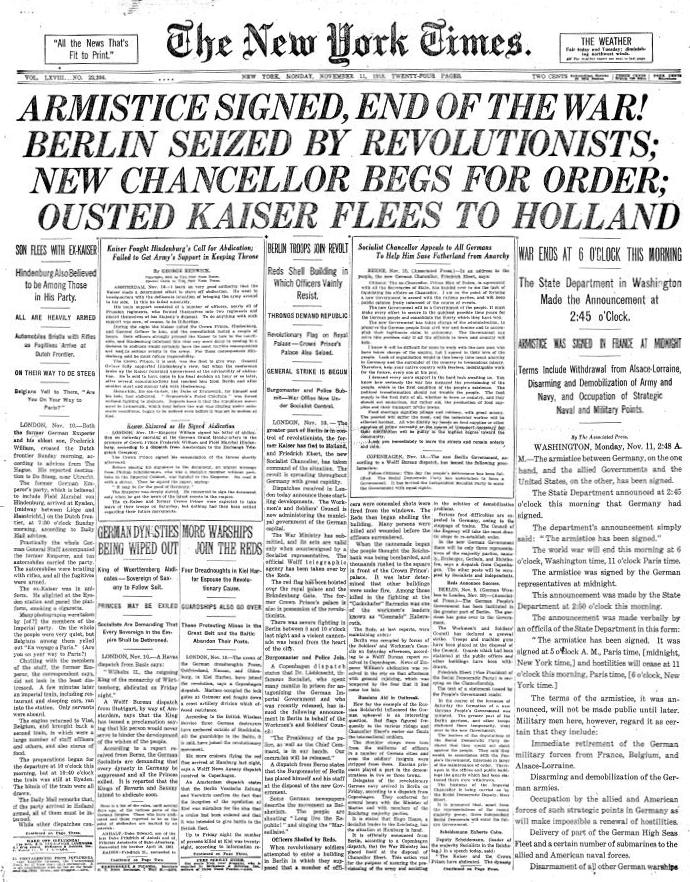 November 11, 1919, marked the initial celebrations of Armistice Day. King George V celebrated the initial Armistice Day at Buckingham Palace, hosting a banquet in Honor of the President of the French Republic. U.S. President Wilson proclaimed November 11 as the first commemoration of Armistice Day with the following words: "To us in America, the reflections of Armistice Day will be filled with solemn pride in the heroism of those who died in the country’s service and with gratitude for the victory, both because of the thing from which it has freed us and because of the opportunity it has given America to show her sympathy with peace and justice in the councils of the nations…"

On May 13, 1938, an act of US Congress made November 11 a legal holiday—a day to be dedicated to the cause of world peace and to be thereafter celebrated and known as "Armistice Day." In 1954, after World War II had required the greatest mobilization of soldiers, sailors, Marines and airmen in the Nation’s history; after American forces had fought aggression in Korea, the 83rd Congress, at the urging of the veterans service organizations, amended the Act of 1938 by striking out the word "Armistice" and inserting in its place the word "Veterans." With the approval of this legislation (Public Law 380) on June 1, 1954, November 11th became a day to honor American veterans of all wars. (US Dept. of Veterans Affairs).

In the United States, Veterans Day honors all American veterans, living or dead, but gives particular thanks to living veterans who served their country honorably, during wartime or peacetime.

An official wreath-laying ceremony is held each Veterans Day at the Tomb of the Unknowns in Arlington National Cemetery, and many parades and celebrations are held all around the country.

In Canada, November 11 is known as Remembrance Day and is a statutory holiday in all three territories and in six of the ten provinces.

In 1931, the federal parliament amended the Armistice Day Act, making the day known as Remembrance Day.  The Canadian department of Veterans Affairs states that the date is of "remembrance for the men and women who have served, and continue to serve our country during times of war, conflict and peace"; specifically, the First and Second World Wars, the Korean War, and all conflicts since then in which members of the Canadian Forces have participated. The department runs a program called Canada Remembers with the mission of helping young and new Canadians, most of whom have never known war, "come to understand and appreciate what those who have served Canada in times of war, armed conflict and peace stand for and what they have sacrificed for their country." (Veterans Affairs Canada. "Canada Remembers > About Canada Remembers". Queen's Printer for Canada. Retrieved 11 November 2011)

Remembrance Day is celebrated all over the globe on November 11, honoring those who have served their countries well— fearlessly and selflessly. We in the Americas honor our veterans, celebrating with those still living and remembering those who are no longer with us.

On November 11, we celebrate along with countries across the world.
From South Africa to Northern Ireland.
From Barbados to Belgium.
From Australia to India.
From Canada to Kenya.
From the United Kingdom to the United States.

Honor those who have served.

In Flanders fields the poppies blow

Between the crosses, row on row

That mark our place; and in the sky

Scarce heard amid the guns below.

We are the Dead. Short days ago

Loved and were loved, and now we lie

Take up our quarrel with the foe:

To you from failing hands we throw

The torch; be yours to hold it high.

If ye break faith with us who die

We shall not sleep, though poppies grow

Lieutenant Colonel John McCrae, a Canadian physician who fought on the Western Front and died while on active duty in 1918, wrote what is undoubtedly the most famous poem of World War I, “In Flanders Fields.”

How can you express your appreciation to those who have served? Click HERE to read about 8 great ways. www.military.com

Whether it is a local farmer's market or main street shops, shopping local sustains our community and supports local merchants.  A win-win for all!

Every drop counts. Do your part to conserve our most precious natural resource.

Looking for a furry friend to become a part of your family? Consider adopting a dog or cat from your local animal shelter. An adopted pet will provide unconditional love and companionship to all.